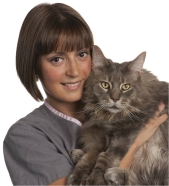 Karen Perry graduated from The Royal (Dick) School of Veterinary Studies, Edinburgh in 2005. Following a short period in mixed practice, she completed an internship in small animal orthopaedics and neurosurgery at Fitzpatrick Referrals in Surrey prior to undertaking a residency in small animal surgery back at the R(D)SVS. Following completion of this in 2010 and achievement of ECVS status in 2011, she joined the Royal Veterinary College, London as a lecturer in small animal orthopaedics. Following four years there she moved to Michigan State University where she is currently an Assistant Professor in Small Animal Orthopaedics.

She has published widely in the veterinary literature with her main research interests being feline orthopaedics, traumatology and correction of limb deformities associated with medial patellar luxation.

Dr. Barbro Filliquist is a Diplomate of the American College of Veterinary Surgeons and the European College of Veterinary Surgeons. She received her veterinary degree from UC Davis. Upon graduation Dr. Filliquist completed internship in small animal medicine and surgery at the University of Pennsylvania. She also worked at Evidensia Strömsholm Specialty Hospital in Sweden. From 2017 she belongs to the Orthopedic Surgery Service at UC Davis.

Dr. Filliquist’s areas of interest includes minimally invasive surgery, joint surgery, and the use of antibiotics in veterinary medicine and prevention of surgical site infections.