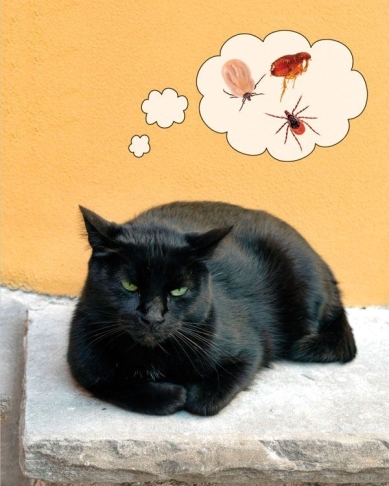 Research shows, that we should consider the risk associated with ticks in cats more carefully.

Considering climate changes and more frequent exposure to ticks, we pay more attention to its presence in dogs and the risk associated with it. Yet we are not familiar enough with risk associated with presence of these small arachnids in cats. The fact that majority of cats are grooming themselves regularly and some live indoor, make us think that the risk of exposure is smaller for them. However more research shows, that we should look at the risk of tick infestation in cats more critically.

Studies were performed in both client-owned animals and feral cats, that were not treated with antiparasitic drugs. There were geographic and seasonal differences noted. Also, it was showed that the site of infestation depends on the species of the tick, what gives the information of which areas we should pay more attention to when checking the cat.

There are several tick-borne pathogens in cats. The most popular ones are Cytauxzoon felis and Anaplasma phagocytophilum. Cytauxzoonosis it a potentially fatal disease. Clinical signs consists with fever, anorexia, icterus, enlargement of spleen, liver and lymph nodes. Despite the earlier believe that only bobcats are at risk of infection, it is now known that domestic cats are at risk as well. Most common clinical signs of anaplasmosis include fever, anorexia and lethargy, It is estimated that up to 30% of Ixodes scapularis ticks may be seropositive is some areas of USA.

Less known feline tick-borne diseases are boreliosis and ehrlichiosis. Few research shown the presence of seroconversion in cats exposed to several bacteria, such as Borrelia burgdorferi, Ehrlichia canis, and other Ehrlichia spp. Although the level of these infections in cats is not known, it is now well documented that B. burgdorferi can cause clinical signs.

Tick-borne diseases in cats are still not well described. However, we should be aware of their presence and potential risk associated with them. It is also recommended to take them into consideration when making the list of differential diagnosis, especially in cats that live in tick habitat.